Welcome to the website for the 2nd Tenirabi Zine, a Prince of Tennis fanzine celebrating the anniversary of mobile game Shin Tennis no Oujisama: RisingBeat – AKA, Tenirabi.

Here you can access everything you need to know about the zine, resources for tenirabi content, and the 1st Tenirabi Zine.

Also listed are some other great tenipuri zines the fandom has produced: 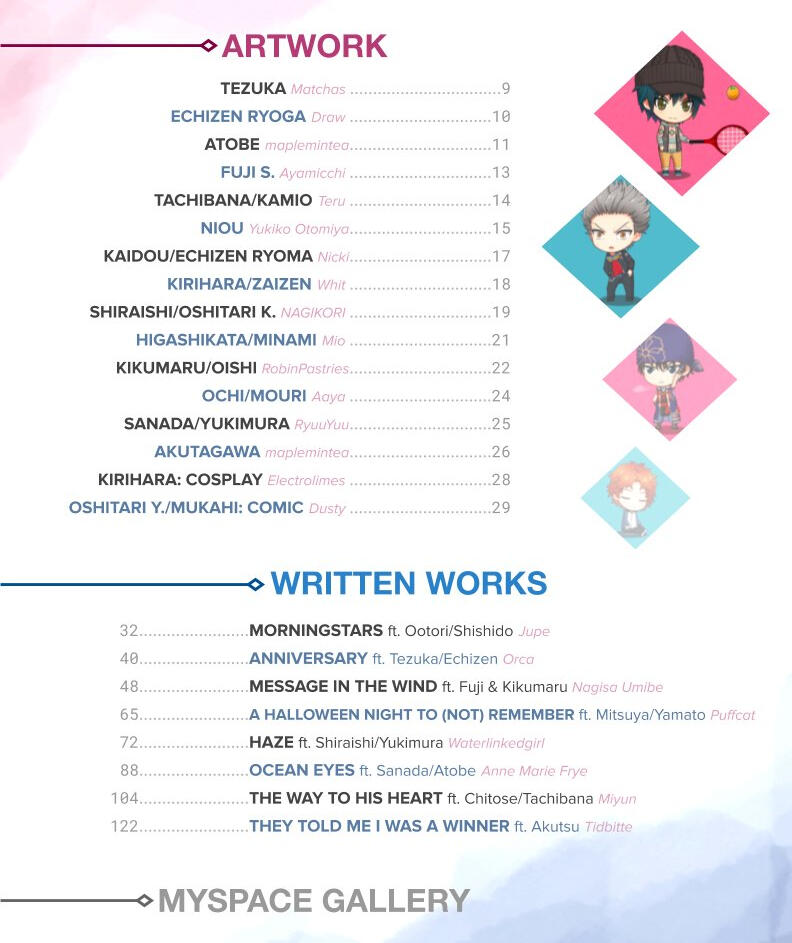 Zine pieces can take inspiration from many places!
A few examples:

Great news! @electrolimes has kindly assembled a directory of English translations for event stories, card stories, character stories, etc. It's an incredible resource! Much thanks to the translators out there.

The stories are the best source of inspiration in our opinion. They have fantastic content. It's highly recommended that you check them out.

This gallery assembled by Holy is a beautiful, comprehensive list of all of the cards in tenirabi. You can find most character cards here.

-The Japanese Tenirabi Wiki is a good source for finding permanent cards, event cards, and situation cards. It's in Japanese, but this website has most card images and they have image icons that make it easy to search by event and character.

-If all else fails, just ask around on twitter or search the #risingbeat tag from around the date of the event using advanced search.

Note: HD images of most unawakened event cards can be found in the event stories for that card, though it might require digging.

To submit a myspace, email them to tenirabizine(at)gmail(dot)com
The subject line should be "Myspace".
You can include your name for credit, your tenirabi ID, or you can choose to remain anonymous.

Sunday, October 4: Idea/plan due. At the very least we need to know what background characters you plan to include and what your theme/idea is, and what game element is. If you change any of this information later that's okay, just keep us updated.

Sunday, November 8: Halfway point, first draft due. You have about a month after this to complete your piece.
Game screenshot due.

–What is 'tenirabi'?
Tenirabi is a nickname for Shintenisu no Ouji-sama: RisingBeat, a mobile rhythm/gacha game centered around the series New Prince of Tennis. It is also referred to as RisingBeat.

–What if I don't draw, write, or cosplay? Can I still contribute?
Yes! You can submit screenshots of your decorated myspace. It doesn't even require filling out a standard application. Just e-mail the myspace screenshots to tenirabizine(at)gmail(dot)com.

–What are the rules for applying?
Check out the guidelines.

–I don't know if I want to apply because I'm busy. When will the zine be released?
Understandable, Tenirabi is a very demanding game. Tenirabi's 3rd Anniversary falls late November, but the zine is scheduled to release a bit later, shortly before New Years.
Final pieces will be due December 6th.

–When can I apply?
Applications open on August 28th and close on September 20th. Assignments will be given out the week after applications close. Myspace submissions and the fan polls are open until December 10th.
If you're interested in contributing to the zine, be sure to apply.

–I don't care about applying. What is this even about?
Check out the zine's vision to see what you can look forward to!

Questions, comments, and suggestions can be sent to tenirabizine.tumblr.com or @tenirabizine on twitter. You can also e-mail tenirabizine(at)gmail(dot)com.

Tenirabi is a broad theme– it covers basically everything at U-17 Camp. The options for zine content are wide and large. For a better idea of dreams and expectations, please read on.

Note: You are not limited to these suggestions! They're just ideas. The only purpose of this list is to provide inspiration.

First, be sure to check out last year's Tenirabi Zine! 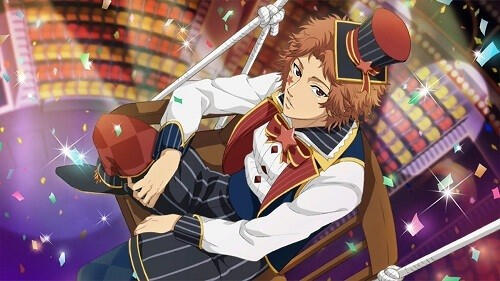 Take inspiration from an event outfit or event aesthetic, design an outfit for other characters or spin off the character in the card.

There are plenty of cute or fun moments in stories that don't revolve around a card. One idea is to illustrate them. (Find stories.)

Base it off a myspace

Whether it's a paintball fight, a garden lunch, a little home you've designed for your favorites, whatever you can come up with– the myspace feature can make excellent inspiration. Story telling or an art setting, there are a ton of directions to go with this.

~ Let the chibis inspire you! ~

Tell a story about a bonus team

Not all the bonus teams are just classmates, room mates, team mates, etc. There are plenty of interesting combinations to think about.

Gakuto, Yagyuu, and Kaidou are all afraid of ghosts, for example.

These three all have pet beetles:

A section of the zine will feature submissions of lovely decorated myspaces, so spice the place up and send in some screenshots!

Anything else you can think of? Do it for the zine!

All events and stories in RisingBeat take place at the U-17 Training Camp. The context of these events seems to be:

— — —
This makes up the history of Tenirabi Canon (aka the Tenirabi Alternate Universe).

The rest of Tenirabi Canon is made up of any content, information, and stories released in the game.
— — —

Note: This definition is more important to keep in mind for fics/comics than for single art pieces or other content. AU fanfiction and comics will be accepted as long as they involve only characters in the Tenirabi Canon and are directly inspired by an event, event aesthetic, card, or other piece of Tenirabi Canon.

Note: Each piece in the zine must have a corresponding game image (card, screenshot, etc.) It will be displayed in the table of contents. It is part of the vision.

Full single page artwork, including at least a basic background (not a single color).

1+ pages (no upper limit), at least 2 panels per page. Leave room for gutter space. Artist is responsible for arranging panels and including appropriate margins/padding. All writing and sound effects must be in English.

600 - 4200 word limit, in English. Major characters and basic premise should be disclosed ahead of time. Subject to basic editing, spelling/formatting. No edits will be published without author's confirmation.

Poem must be in English. Limit of 1200 words. Other than the basic guidelines (teen appropriate and tenirabi related), anything goes. No edits will be published without poet's confirmation.

A myspace submission can be the full myspace itself, or it may include screenshots of a myspace and its highlights, close ups, or chibi interaction.

Cosplay guidelines are flexible and will be decided on a case by case basis.